​This grouping of three house grounds in a circumferential area with dug pit dunes, dam and ramparts has a late medieval character. Borrarp is mentioned for the first time in the 1300s.
In 1930 excavations were made here from the 18th century. 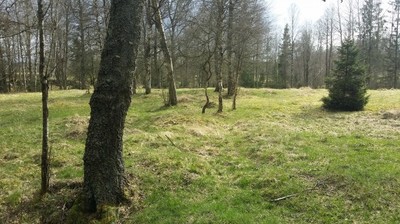 A search of the medieval farm Borrarp
Archaeologists from Västarvet Cultural Environment / Lödöse Museum are looking for the medieval farm Borrarp. Come and take a closer look at the archaeological survey in the field and try to make cardigan and spin thread in medieval fashion.
Date: Sunday, August 28th
Time: 12:00 - 16:00
The program:
The Farm Borrarp is famous since the late 1300s, but exactly where the farm was located at that time has fallen in forgetfulness. Now we are looking for the search for the medieval farm Borrarp!
During the burial of Borrarp in the 1930s, everyday objects were found from the 18th century. Museum teachers from Västarvet tell the story of Borrarp, teach the art of spinning wire in medieval ways and show objects from the 1600s and 1700s.
Hembygdsföreningen participates in the archaeological survey.
Views: 12, 13, 14 and 15 in about 30 min. Then there is time to go around the spot, peek into the pits and ask questions to the archaeologists. Try to karda / spin in medieval times between 12 and 15!
Visiting Address: Borrarps Gård 1, Dalstorp
Landscape: Västergötland