​According to the ledgend, the troll did not want any church in Nittorp. What was built during the day tore the troll during the night. Several different construction sites were tested but with the same result.
In the end, two twin oxen strung in front of a stone slope and let them rush away. They stayed on a hill at Stommen. Here the construction was resumed. Now the church building had to be laid in front of the troll. So far the saying. Now let's go on more facts.
Here, Nittorp's medieval church has been laid out. It was built in the late 1100s or in the early 13th century. The impressive measure of the church
(20m long x 8.2m wide in the long house) indicates that at the time of construction, Nittorp was the population center of the pastorate. The oldest part of the ruin is the choir.
In the original church there was only one entrance in the southwest. This was clogged, but its location is well seen today. Traces of the mighty triumphal arch are visible in the floor. This separated the long house from the choir. Today's altars are in some parts original. Sakristian was built in the 17th century and has a window in the north and entrance directly to the choir. In the preserved walls there are traces left after so called. Cross wheel, which was part of the Catholic opening ceremony at the founding of the Church. Several tombstones are found in the ruin along with the remains of a double-glazed square window (in the wall to the left of the altar).
At the cemetery there is only one standing gravestone. Underneath Anna Persdotter rests from Knestorp, died in 1735. In 1847, worship was held for the last time in this church. In 1868, both the triumphal arch and the choir remained in the abandoned church. At Skara Museum and the Nordic Museum in Stockholm, a number of objects are stored in Nittorp's medieval church.
In 1938 the ruin was restored (memorial to the west of the church) and here is the open-air service held every midsummer. 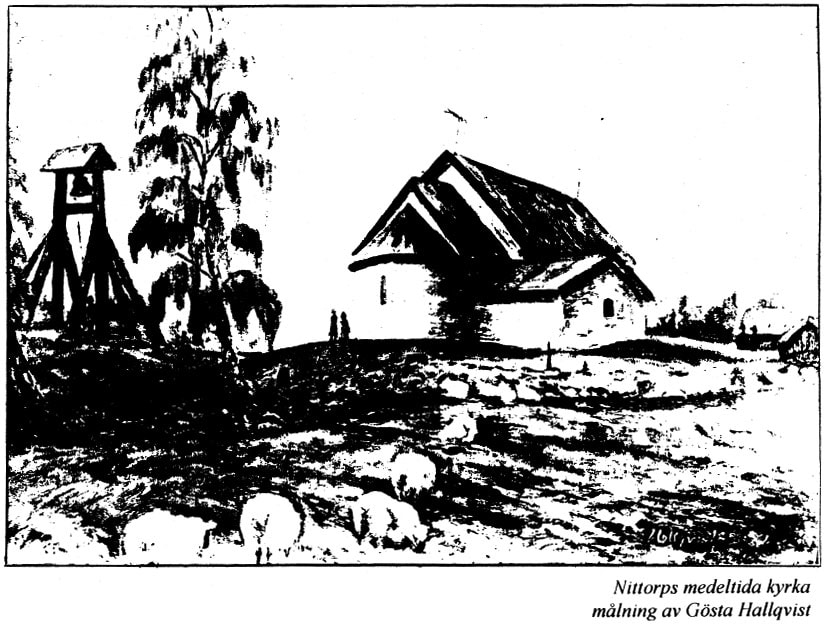