​Nittorpsglasbruk - leftovers after old glassworks, 1874-1893
Nittorp's glass mill was founded in 1874 by the companions of the glass blower champion Alexander Heintze from Limmared's glass mill, Lars Johan Kindlund from Baltas, Johan Viktor Olsson from Långared, Alexander Andersson from Lilla Spånarp and the bookkeeper A.S. Thoren, in Hagared. In 1872 Heintze bought Nittorp's Södergården by Kindlund and Andersson, but moved in until 1874.
With the help of large bank loans and loans from private individuals and the municipality of Dalstorp, operations were given a flying start. The companies were able to dig a channel from Tommared down to Hallabäcken at the glass mill. On both sides of the canal, where it was only a pasture, there was a welcome cultivation field. At the glass mill, the so-called The cabin well to have access to the reservoir.

During the good years, both fingers and glasses were made. The glass was marketed by glass bells throughout the Nordic region.
In the field up to Sörgården (behind the sign "Glasbruket") was the glass hut with its ovens and Hyttebrunnen.

On the other side of the country road lay the pack and the large manor house. This was moved to Limmared's glass mill under the name Nittorpsbygningen. On this side, the sliper in Hallabäcken also existed before it was due to Water shortage was moved to the so-called drilling plant (see No. 10). If you walk down the stream downstream you will find remains of the dam to the slipper.

The big debts could not be amortized and eventually the bankruptcy of the door stood.
In April 1882, Heintze escaped to the United States to escape his creditors. After three visits by representatives of creditors, the truth is discovered. Heintze was wanted all over the country without any results. The following year, Nittorp's glass mill was bankrupt. The home-companions were pulled all in bankruptcy, along with a number of private individuals who went to the loan for loans.

After segregated bankruptcy negotiations, the glass mill in Fredrik Brusewitz was in 1885.
He immediately gained profitability, which he continued to 1893. This year, the last glass was blown in Nittorp's glass mill.
Today, the remains of the glass canopy with their oven, Hyttebrunnen and lots of glass crosses, the houses after the packing and the manor building, together with the dust fences after the slurry reminds of an intensive but short glass mill in Nittorp. 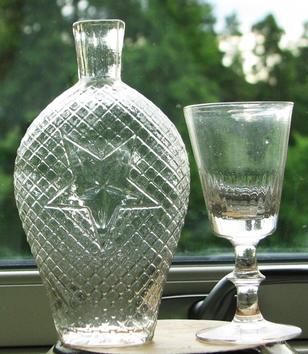 A clip from an antique forum about the above and below:
Nittorps Glasbruk smallest variant plunta? This must be the smallest size of these plunts? This is documentary to Nittorps Glasbruk (eg Limmared who released the production to Nittorp) Height: barely 14 cm.

It's a nice hunting bottle this one, so far I know only in the small size. But you'll be lucky if you find one that's actually blown in Nittorp, which was already downloaded in the 1880s, or Limmared also for that matter. Indeed, many of these bottles are made in the 1970s in Bergdala (I have for myself) in a preserved original form, at the same time, many OII plots in white and blue glass were discussed earlier for some years ago.
The Bergdal bottles were then used as gifts for customers and visitors to the mill in Limmared.
You can usually "take" the new ones on the glass mass and the gloss on the glass. The molds are also available at the museum.
Below the newly created plots from the 1970s: 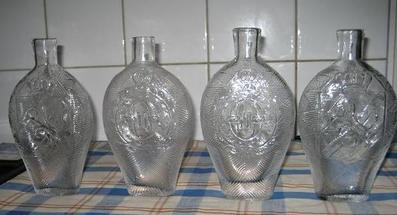